New Morning is a “battery boat” without a genset. The design goal was to minimize the amount of time that we run the main engine to charge the batteries, minimize the number of engines to maintain, and at the same time have a pretty high level of creature comforts so that we’re not “camping”. The solution we created was a boat with a big battery bank, two renewable energy sources, large alternators and low power consumption devices where possible. Here’s a little more detail on each of those components. 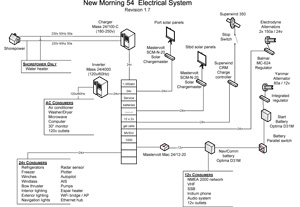 Click on the picture to get a nice pdf.

The foundation of the electrical system is a bank of twelve 1,000 ahr 2v gel cells, yielding a 1,000ahr 24v “house” battery bank. The assumption is that this gives us 500 ahrs of working power (12KW) when we discharge to 40% and charge to 90%. The house battery bank weighs about 1,800lbs and is positioned immediately above the keel. To charge the batteries we have 1) a Superwind 350 wind generator, 2) 568 watts of Sunware solar panels, 3) two 150a Electrodyne engine driven alternators and 4) a Mastervolt 24-100 charger.

The wind generator starts producing power at about 12 knots and its output rises sharply to a peak of 350 watts at 25 knots. At 350 watts this would theoretically produce as much as 350 ahrs / day. In practice we don’t like to spend a lot of time in 25 knots of apparent wind. Nonetheless, the wind blows pretty much 24 hours a day so based on my measurements I estimate that we get 24-40ahrs / day from the wind generator. If it’s a windy night I can see the results when I note battery status in the morning; it makes a meaningful contribution to offsetting consumption. When sailing with the wind from forward or abeam we also see good output; but when sailing downwind the apparent wind is usually not much above 12 knots.

To protect the solar panels, minimize windage and reduce their impact on the aesthetics of the boat we have flexible panels that are mounted on the top of the dodger and the mid-deck. Again we get nowhere near the theoretical 568 watts, but if the sun is out I do see about sixty percent of that for 5-7 hours a day which usually means there is more charge in the battery at sunset than there was at sunrise. I really like the solar panels because they are so simple; no moving parts, no maintenance, and the amps come pouring in whenever the sun hits them. Depending on the orientation of the wind and sun I usually move the boom to one side or the other to reduce shadows. What’s surprising is how often clouds reduce their output. We think of the tropics as perpetually sunny, but in reality there are a fair number of passing clouds.

The Mastervolt 24-100 charger accepts 205-260v @ 50-60Hz. New Morning has shore power connectors for both US (3 wire) and European style (2 wire) 220-240v power. The charger puts out 100a which means it usually requires overnight to fully charge the batteries from shore power.

A Mastervolt Mass Sine 24/4000 inverter provides 117vac for the AC consumers. It will produce up to 4KW, though we rarely call for more than 1KW. AC consumers include the AC outlets, microwave, washer and air conditioner. We even normally run a blender and toaster to prepare breakfast each morning.

Since some devices require 12v power, we have two identical 12v Optima Blue Top spiral batteries, one to start the engine, and one to support the 12v consumers (aka Nav battery). The engine start battery is charged by the Yanmar stock engine alternator while the Nav battery is charged from the house bank by a dedicated Mastervolt 24/12 charger. If necessary, the two batteries can be bridged to start the engine or power the VHF.

On the consumption side, the biggest power reduction is from using LED lighting almost exclusively as explained more fully in Lighting.

The Spectra Newport 400 Mark II water maker is also very power efficient, consuming less than an ahr per gallon . And of course all the winches are powered and tend to be used when conditions are challenging, and in nice conditions we crank the handles for exercise. We try to watch consumption, but in comparison to most cruisers we’re probably pretty indulgent.

Innumerable people told us to be sure that we reserved some interior space because we’d soon see the error in our ways and be adding a genset. The message was that while it was a noble goal, a 54’ boat with all our luxuries required a genset and we were being foolishly idealistic. I’m pleased to say that that has not been the case. Whereas it’s common on most boats without a genset to run their main engine for an hour in the morning and an hour in the evening to keep their batteries charged, and boats with gensets tend to run them for similar periods, we enjoy not running any engine on most days. In practice, unless we sit at an anchorage for an extended period, it’s fairly unusual that we run the main engine solely for the purpose of charging the batteries. Most of the time when we need to charge the batteries it’s done in conjunction with moving the boat and we’ll power for a couple of hours when we might have sailed which keeps the engine happier and allows us to use the “excess” power generated while motoring (after the 1st half hour the batteries can’t absorb all the power from the alternators) to make water, wash clothes, etc.

With normal solar and wind we regularly go five days without running the engine. Our best period was anchored off Grand Case on St. Martin. We started with full batteries, had mostly sunny days and a fairly constant breeze. We were there for ten days during which we made water, washed clothes, watched movies or TV at night and didn’t do anything special to limit our consumption. After ten days we motored the 16 miles to St. Barths and arrived with full batteries. But five days is more common and we usually find that we’re changing anchorages after five days. If we plan to move after 6-7 days we may charge for an hour to bridge us over until the next period of motoring.

Here are a few technical points that may also be of interest.

Only the water heater and battery charger are directly powered by shore power. They both accept a wide range of range of voltages (200 – 250v) and frequencies (50-60Hz) and neither is fussy about the quality of the power. All other AC consumers are supported by the inverter, including the air conditioner. This allowed us to eliminate an isolation transformer while at the same time ensuring that our AC consumers have very clean power.