Hull
This was essentially the exclusive domain of Chuck Paine. My input here was pretty minimal. The hull was originally drawn with an LOA of 52’ 11” which was the maximum Chuck could draw and meet my specification of 52’. I subsequently concluded that the swim platform was too short and we added 10” to the swim platform which made her 53’ 9”, thus becoming a 54 footer; adding 10” added 2’! 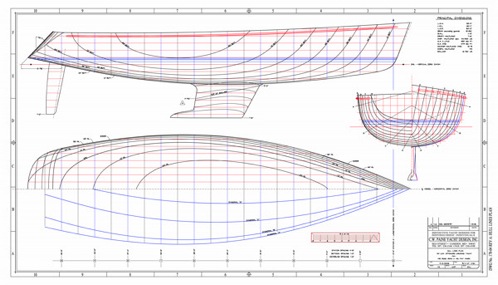 Chuck combines his early experience drawing racing boats for Dick Carter (sharing an office with Bob Perry), the practical nature of a cruising boat and his lifelong avocation as a painter to create hulls that are sea kindly, fast and aesthetically pleasing. He labored long hours on ensuring that New Morning would meet my functional requirements and his aesthetic requirements.

I feel he did a great job. First and foremost New Morning is fast and comfortable. While she won’t be confused with “marina jewelry” or the sleek lines of a Wally, she’s a pretty girl in her own right.

The hull mold was built by Union River Boat Company. A plug (sometimes called a male mold) was built in essentially the same manner that a wood boat would be built, by planking over a set of frames. A female mold was built over the outside of the plug, then split down the middle to create two halves. The female mold halves were then trucked to Lyman-Morse where they were bolted back together. Building on the inside of a female mold ensures that the hull will have a fair exterior, the portion of the hull that meets the water. They began building the plug in September of 2006 and the mold was installed at Lyman Morse in early January 2007. 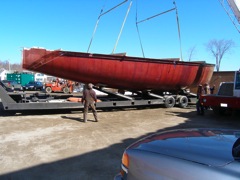 The hull was built using the SCRIMP process. Chuck Paine provided the laminate schedule which specified the thickness and angle of orientation for each layer of E-glass. The various layers of E-glass are put in place on either side of the A-rated Corecell, while dry. Then piping for the resin is laid in horizontal strips separated vertically by about 18″. This is all encased in an air tight plastic wrap and a vacuum is applied at the top edge. The magic moment is when the clamps on the hoses are removed, allowing the resin to flow from buckets and drums of Derakane 8084 vinylester resin. The resin is drawn up into the pipes and saturates the materials while slowly moving up the hull. Two months of works comes to fruition in a few hours and the following day a new hull is ready for the next steps. After adding various longitudinal and athwarship stiffeners, the mold was split in half and the hull was lifted out.

Keel
The keel is one of the most critical elements of upwind performance. It is also usually the first thing to hit the bottom if the boat is run aground. Unfortunately these two facts work against each other. 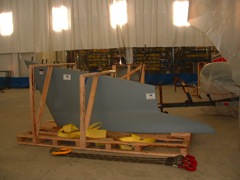 A deep keel provides better upwind performance but also makes it much easier to run aground and also limits access to many coves, inlets and lagoons. After a considerable amount of discussion we decided on a 7.5’ draft. Chuck felt this would give us reasonable performance, much better than his shoal draft designs with 5’ – 6’ of draft, and we were convinced that 7.5’ would not be a major limitation.

In practice the upwind performance is fine, better than many other cruising boats in our informal “races”, but certainly not up to the standards of our previous boat which was much more performance oriented. However, we’re very glad we’ve got just 7.’5 of draft, so the compromise has been good for us.

Mars Metals built the keel from a CAD file supplied by Chuck. Mars built a mold, positioned the keel bolts, and filled the mold with 17,000 lbs of lead. It arrived at Lyman-Morse and the hull dropped onto the keel bolts without hesitation. It doesn’t get much better than that! 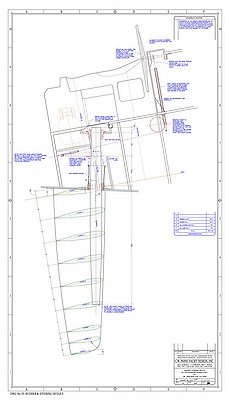 The rudder is another important factor in upwind performance as well as being critical to the ability to turn and control the boat. New Morning has a spade rudder, a fully modern design that provides better performance than keel hung or skeg hung rudders. But while spade rudders are much higher performance, they are also much more vulnerable since they have neither a keel or skeg to support and protect them. Chuck’s belief was that a conservative cruising boat should protect the rudder by keeping it away from the bottom and that translated into a keel that was 12” shorter than the keel. Our previous boat had a draft of 7’ 3” and the rudder was 7’ deep, only 3” shorter. I could not see how the new boat would have roughly twice the displacement but have a smaller rudder.

About the time of this discussion there was a Volvo 60 that damaged its rudder in the Bay of Biscay shortly after the start of the race. I noted that the rudder had snapped off at about half its length, leaving a stubby but serviceable rudder which they were able to use to reach Spain and make repairs. I concluded that we should have that sort of rudder and discussed it with Composite Solutions whom we had selected to build the rudder. The rudder and rudder shaft are both built of carbon fiber. Composite Solutions convinced me that if the rudder was struck below the post, the rudder would shear off below the post, leaving us with a stub that would steer the boat.

Now that we felt we had a “break away” rudder tip, we compromised on 7’ for the rudder. We hope to never test the break away feature!