I began thinking seriously about blue water cruising in 1998. I subsequently ordered a new Swan 44 Mk II in 1999 and took delivery in 2000 (featured on the cover of Sail in July of 2007). Although entirely unrealistic, I outfitted the Swan as though she was going blue water cruising. She had a watermaker, SSB, redundant navigation systems, autopilot, lee cloths, freezer/refrigerator, etc. Sailing on the California coast, which is not particularly cruiser friendly, it quickly became apparent that she was truly a “performance” cruiser, with the emphasis on performance and “cruising” just a nod to the fact that she was full of furniture. The cockpit was too exposed, the dodger provided some protection, but at the expense of being able to see the sails being controlled by the winches under the dodger, and at 6’1″ I was ducking (or whacking) my head way to often!

I knew I wouldn’t be leaving soon, so I continued to look at a wide variety of boats in search of the optimal cruising boat. The Dutch built Trintella’s, designed by Van de Stadt, caught my eye, as did much of the Van de Stadt design portfolio. 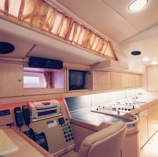 By chance, while bareboating in Tonga in 2002 I passed by a Trintella 51. One thing led to another and Manfred and Renate Urich were very generous with their time (and beer) providing a thorough tour of La Rossa. I was smitten! She had a nice hard dodger which provided lots of protection while underway and a refreshingly light maple interior which felt wonderful in the tropical heat.

As I read more and more about blue water cruising boats, I figured out that that I had three choices:

In 2004 I did the Baja Ha-Ha with the idea of gaining better insights into what I wanted in a true blue water cruising boat. It was a great trip and upon returning from Cabo San Lucas I sat down to write a design brief for the next boat. I decided that in 2005 I’d do the research necessary to make a choice and then let my choice dictate the next step since each choice implied a different timeline. At that point I was heavily biased towards an aluminum boat.

In early 2005 I met with Cees van Tongeren at Van de Stadt outside Amsterdam and discussed my design brief. Cees was happy to design an aluminum boat, but told me if he was building it for himself, he’d build with fiberglass.

From Amsterdam I traveled to Dusseldorf for the Boot show. This is a really amazing boat show. It is entirely indoors (a good thing

since it was Dusseldorf in January) and of a scale that is inconceivable when compared with US boat shows. I could go on for pages about this show, but suffice to say that if a product is associated with boating, it is there. Every major yacht manufacturer and custom builder is present as well as every producer of anything related to yachts. Seventeen exhibit halls filled with equipment (think diesel engines the size of your dinner table) and manufacturers representatives. I spent four full days there and did not visit every hall!

In addition to thoroughly inspecting every boat I was even remotely considering, thirty others I wasn’t, and speaking with more yacht salesman than you can imagine, I also met with another naval architect and several builders. While the builder liked aluminum, the second architect again steered me towards fiberglass.

Additionally, since Paul Kaplan at KKMI was advising me to buy a new Swan 53 (Nautor’s alleged return to cruising boats), I went by the Nautor booth. As a current Swan owner I got the red carpet treatment, but when I asked if I could have something other than a teak interior, I was politely told “no”. I had found the limits of “semi-custom”!

I came back to the states and a few weeks later went to the Miami Boat Show. Unlike Dusseldorf, it took about two hours to see all the sail boats! However, I did manage to meet with Chuck Paine to discuss the design brief and Chuck introduced me to Tom Morris of Morris Yachts.

I left the Miami show and drove up to Ft. Lauderdale to meet with David Walters and look at

a couple of used aluminum boats. Both had been built by Kanter in Canada. One was an 18 month old custom Chuck Paine design named Dawnbeaker pictured at right. After looking at both boats I had a long chat with Dave about the resale of custom yachts and aluminum yachts in general. Six weeks later I made my first trip to Maine to meet with Chuck Paine and further explore the custom boat option. During that trip he introduced me to both Morris Yachts and Lyman Morse Boatbuilding.

Based on the comments from Cees van Tongeren, David Walters, Chuck Paine and a couple of aluminum horror stories from other sources, I was forced to reconsider my original thinking about building an aluminum boat. And after I had reconsidered, I decided that the next boat would be fiberglass (see Why Fiberglass for an explanation). But that still left the three choices outlined above.

I spent the next six months looking at lots of new and used boats, speaking with dealers, reading specs, reviewing cruisers web sites and corresponding with cruisers both past and current. In the process I looked much closer at the systems and energy management.

Most boats larger than 50′ have a diesel driven generator (aka genset) to generate power for the boat’s systems. And then once the genset is in the equation, the systems tend to expand to use the available power. But I don’t enjoy engine maintenance, so maintaining two diesel engines was not very appealing. I decided that I would not have a genset (see the Systems section for a further explanation of the electrical system). But removing the genset was a problem for 50’+ production boats that have an energy system design that assumes the presence of a genset. 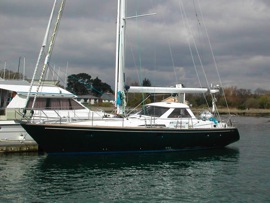 There are also very few production boats with an integrated hard dodger (Hallberg Rassy, Trintella and Morris were the best options at the time) and a few others which will add a hard dodger (e.g., Swan and Oyster) as part of their customization of a semi-custom boat.

Eventually each of the production boats was eliminated from consideration based on what would need to be done, or compromised, to meet the design brief. That eliminated the “new” option and I focused on whether I could transform a used boat into what I wanted.

I focused on used custom boats, and a few production boats. This included the Dashew boats, Paine designs, Perry designs, Van de Stadts, older Trintella builds (i.e., Dutch built), etc. After looking at a lot of used boats It became clear that a used boat would require a major refit to meet the requirements without making a lot of compromises. The energy systems were probably the most difficult as it gets really expensive to rewire a boat. And inevitably 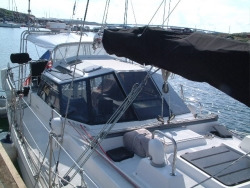 other problems would be found with the original boat during the refit. And even then I anticipated a steady stream of maintenance issues from a used boat. One of the things that I had enjoyed about the Swan was that starting with a new boat, once past the first year, she was pretty reliable and didn’t generate a lot of “unscheduled maintenance”. It’s a lot easier to keep a boat in good working order when you start with everything new and then provide the regular maintenance rather than fixing each item as it fails because you don’t know its history. The primary attraction of a used boat was that it would probably be a lower total dollar cost, but with a little less reliability. There is no question that you can buy a used boat and refit it into solid platform; it is regularly done by many cruisers.

In my case, I decided I’d prefer a clean start and since I could afford to built a custom boat I eliminated the “used and refit” option. And to be fair, after thinking about the problem for about four years, looking at a lot of boats and collecting comments from a variety of cruisers, I had a number of ideas that I wanted to see incorporated into a new boat. And that led me to a custom boat!