Home|About New Morning|Safety|Designed For Safety
Bulkheads
First, keep out the water! New Morning was designed with two watertight bulkheads. The forward bulkhead, between the forward cabin and the bow locker reduces the opportunity to flood the vessel due to striking something in the forward sections. This bow locker is drained with an electric bilge pump. The aft bulkhead, behind the mechanical space and forward of the rudder, is designed to keep out water in the event of the failure of the lower rudder bearing. This area is monitored by a high water alarm and drained with a manual bilge pump located in the cockpit.

The most dangerous piece of equipment on a sailboat is the boom. The first thing we did in the design of New Morning was make it difficult to be hit by the boom. 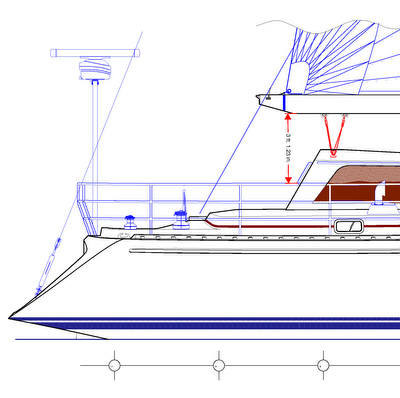 The bottom of the boom is 7’ 6” (2,3 meters) above the sole of the cockpit. Standing in the cockpit it is not possible to ever be hit by the boom. An accidental gybe, an uncontrolled tack, anything which causes the boom to swing across the cockpit out of control does not put the crew at risk. It’s not a matter of the crew being careful, if they stand on the cockpit sole, they cannot be hit. That takes the most dangerous piece of equipment out of the equation, at least while in the cockpit.

Another dangerous piece of gear associated with the boom is the traveler, which we eliminated on New Morning. While crewing on another boat during the Coastal Cup in 2004 we found ourselves flying downwind in 30kts+ off the Big Sur coast. An accidental gybe (while one of the owners was driving) sent the traveler car right through the end of the traveler and required a temporary repair to enable us to complete the race. The traveler car also presents a risk to fingers and hands that are in the wrong place at the wrong time. 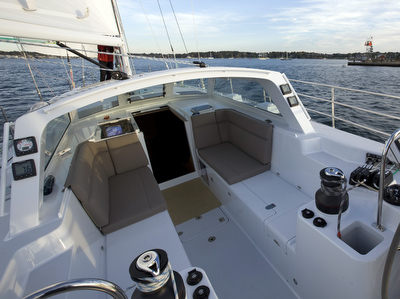 On New Morning we eliminated the traveler entirely and increased the size of the hydraulic vang (Navtec A850-VC-030). This gives us all the leech control provided by the traveler without any of the associated risks.

Cockpit / running rigging
The next most dangerous aspect of sailing is going forward to the mast or foredeck to reduce sail area. New Morning’s running rigging design brings all the reef lines, jib lead position and main halyard back to the cockpit. A single crew member can reduce the total sail area from over 1,300 ft2 (120 m2) to 232 ft2 (21,5 m2) without leaving the cockpit. And that crew member will be working primarily in the center of the boat, at waist height, surrounded by a 1 1/4” (31mm) stainless steel pushpit which rises to over 50” (1,5m) above the cockpit sole.

As Bob Perry wrote in the December 2008 issue of Sailing “As cruising cockpits go, this one is about as good as you can get.”

Hard Dodger
On the first night of the first Pacific Cup (San Francisco to Kaui) in 1979 I was at the helm in roughly 35-40kts of wind when the entire boat was swept by a breaking wave. I was knocked from the helm but fortunately my harness and tether prevented me from being knocked overboard. Our man overboard pole and horseshoe ring were both swept from the transom and bobbed in our wake, red lights blinking, as we sped on towards Hawaii. It was not an experience I wanted to repeat.

Virtually every cruising boat has a canvas dodger stretched across a stainless steel frame. More than one of these canvas dodgers has been damaged by a breaking wave. On our passage from Newport, RI to Bermuda aboard New Morning in 2008 we poorly timed our crossing with the arrival of a cold front and were rewarded with 30kts of wind and seas that regularly broke onto New Morning. It was an unpleasant passage! 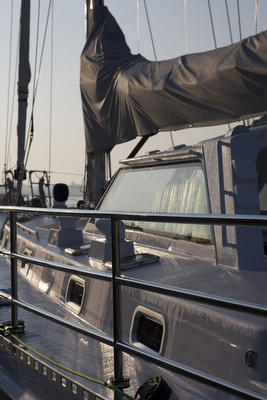 But sitting on watch under the hard dodger, tethered to the cockpit jack line, it was comforting to feel the waves break onto New Morning and then watch hundreds of gallons of water stream off the hard dodger, out the back of the cockpit and back into the sea. Even when working back at the helm or sail control lines, it’s a short two steps to be back under the dodger to duck an approaching wave. The dodger was integral to the original design and built into the structure of the boat. The arch at the aft end of the dodger which supports the main sheet is built of carbon fiber to increase strength and reduce bulk.

Lifelines / Pushpit / Hand holds
Of course it is impossible to completely avoid going forward. Setting the staysail, attaching the preventer and setting up a reaching sheet all require a short trip forward. The typical lifeline configuration is two lines with the top line 24” (60cm) above the rail. On New Morning we raised the height to 30” (76cm) and added a third line; this reduced the space between the lines from 12” (30cm) to 10” (25cm) making it harder to slip out through the lifelines. We also brought the stainless steel pushpit well forward of the cockpit exit point so that when leaving the cockpit (after clipping into the jack line) you can grab onto a solid structure with both hands. The hard dodger has hand holds fore/aft and across the aft end, as well as a vertical a hand hold at the exit point. The deck house has hand holds from just forward of the dodger all the way to its forward end. 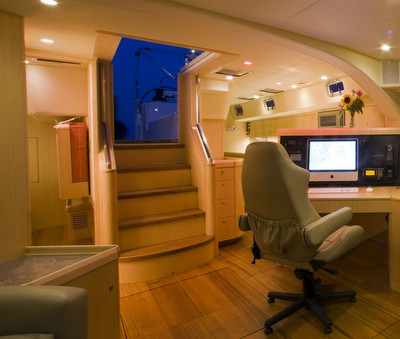 Companionway / Galley / Below decks
To conserve interior space many boats have a near vertical companionway, more a ladder than a stairway. For New Morning we took a page from both Swan and Trintella and designed a stairway with stainless hand rails that provides a convenient, aesthetically pleasing and safe transition to/from the cockpit.

Below decks many observers have commented on New Morning’s open salon. What’s easy to miss is that while underway the interior arrangement is designed for safe passages by a cruising couple. From the bottom of the companionway the galley, nav station, head and aft berth are each just 2-3 steps away. The galley is designed to provide a safe working environment while precluding being thrown across the cabin. It’s convenient to brace oneself against one side or the other while working. 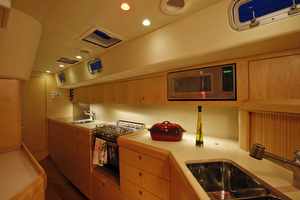 The nav station chair (bolted to the sole during passages) is adapted from a sports car seat and provides excellent lateral support while the arms preclude the chair from swiveling. The aft head is two steps to starboard, and it’s just one more step to the aft cabin sea berth. For both comfort and safety, the ceiling (inside of the hull), is finished with the same UltraLeather as is used for the overhead panels, but with an additional 1/2” (12mm) of foam padding. This makes the sea berth even more comfy and the crew less likely to be bruised.

Speed
I’m not sure if he originated the idea, but I first came to appreciate the importance of boat speed to safety when reading Steve Dashew. His thesis was simple: less time on passage is less opportunity to encounter adverse weather. Chuck Paine got his start designing racing yachts for Ron Carter and his interest in performance never waned. New Morning always gives us great speed. On our longest passage, from the Galapagos to the Marquesas, we sailed 2,875nm (and motored another 223). With just Fay and I for crew, using only a main sail and working jib we averaged 8kts for fifteen days for an average daily run of 192nm, not bad for a cruising couple and no spinnaker. Our motoring range of over 1,000nm also gives us the ability to keep moving when the wind is too light.